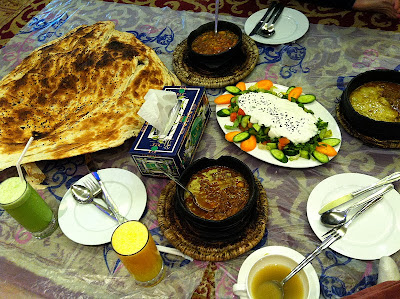 Here is a guide to all the different dishes in Yemeni cuisine.  Some of my favorites are matfaiya, chicken ogda, and malawah.  I put other spellings of the dishes in parenthesis below the name.  Load up this website on your smart phone and you can easily order what you want at Yemeni restaurants based on the photos and names in Arabic! 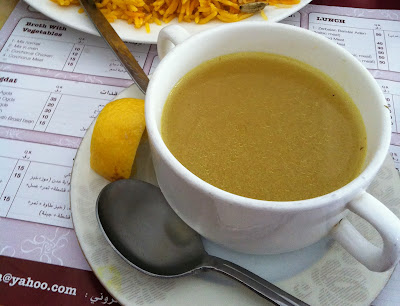 Maraq (مرق) is a Yemeni lamb broth soup is always served at the beginning of the meal. It comes with a slice of lemon to squeeze into the soup. 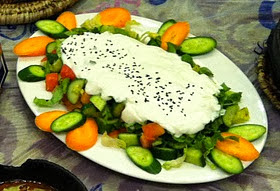 Yemeni salad (سلطة مشكل) is generally pretty simple and includes lettuce, tomatoes, cucumber, and sometimes carrots.  Sometimes there is no dressing on top and other times there is a simple yogurt or tomato dressing.  The salad also comes at the beginning of the meal.

Although each region has their own variation, salta (سلتة) is considered the national dish. The base is a brown meat stew of Turkish origin called maraq (مرق), a dollop of fenugreek froth, and sahawiq (سحاوق), a mixture of chillies, tomatoes, garlic and herbs ground into a salsa. Rice, potatoes, scrambled eggs, and vegetables are common additions to saltah. It is eaten traditionally with Yemeni bread, which serves as a utensil to scoop up the food. 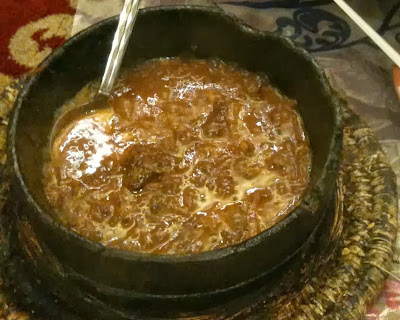 Fahsa (فحسة) is a Yemeni stew made of lamb cutlets into a lamb soup with spices and holba (fenugreek).  The pieces of meat are small and there are not any noticeable vegetables.  It is also eaten traditionally with Yemeni bread, which serves as a utensil to scoop up the food. 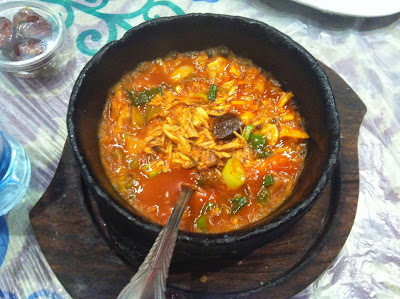 Ogda (عقدة), meaning knot, is a stew made from tying and mixing all the ingredients together. There are many types of ogda and it can be made with small pieces of lamb, chicken, or fish that is mixed and cooked together with any vegetables including tomato, carrot, potato, zucchini, etc.  This dish is extremely popular among people trying Yemeni food for the first time.  It is also eaten traditionally with Yemeni bread, which serves as a utensil to scoop up the food. 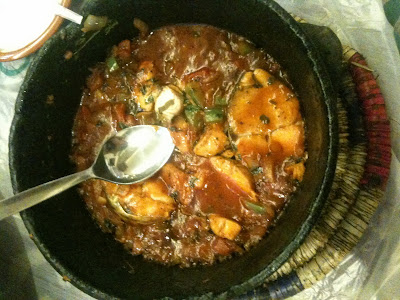 Matfaiya (مطفاية) is made with large chunks of kingfish in a thick, tomato based sauce with other vegetables. 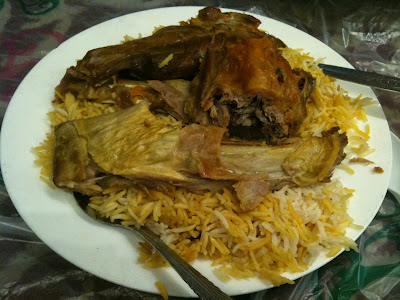 Mandi (المندي‎) is the traditional dish in Yemen native to Hadhramaut Province and many other Yemeni cities. It is now very popular in the rest of the Arabian Peninsula. Mandi is usually made from meat (lamb or chicken), basmati rice, and a mixture of spices. The meat used is usually a young and small sized lamb to enhance the taste further. The main thing which differentiates mandi is that the meat is cooked in the tandoor (taboon in Yemeni) which is a special kind of oven. The tandoor is usually a hole dug in the ground and covered inside by clay. To cook mandi, dry wood is placed in the tandoor and burned to generate a lot of heat turning into charcoal. Then the meat is suspended inside the tandoor without touching the charcoal. After that, the whole tandoor is closed without letting any of the smoke to go outside. Raisins and pine nuts can be added to the rice as per one's taste. Mandi is also considered as the main dish served in special events such as weddings and feasts. 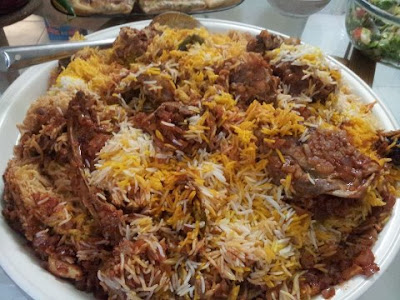 Zerbian (زربيان) is a lamb dish made distinctly with the most expensive spice in the world, saffron.  The rice, lamb, and spices are all cooked simultaneously in the pot together, unlike mandi, where the rice and meat is cooked separately.  It is usually served at special occasions, such as weddings. It is similar to Hyderabadi biryani from India. 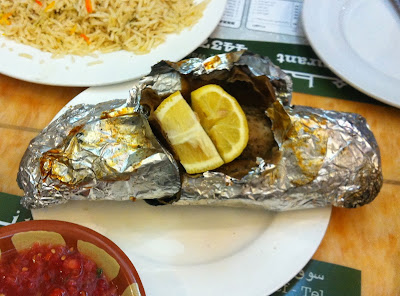 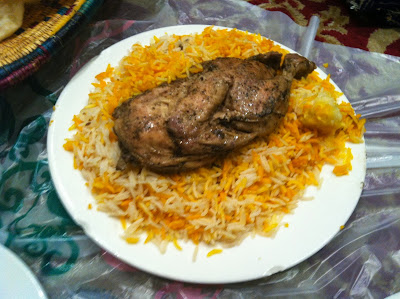 Madfoun (مدفون) is a northern Yemeni dish from Hoddideh.  It can be made with chicken, lamb, or goat, and the meat is buried and cooked under the coal. 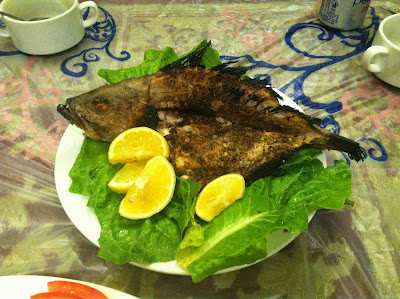 Mashwi (مشوي), meaning grilled or roasted, is the whole fish grilled in the oven and served simply with lemon slices. 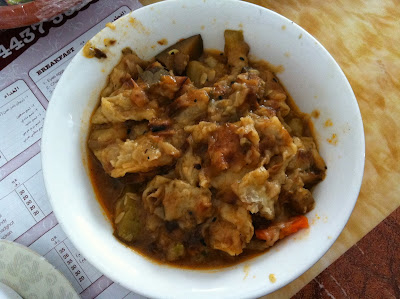 Fatta (فتّة‎), meaning crushed or crumbs, is a sort of bread soup made with pieces of the Yemeni bread bits mixed with meat broth and cooked vegetables making it soggy and mushy. As flatbreads quickly tend to get stiff when exposed to air, it is indeed a way of using stale bread. Fatta can also be made as a dessert with sweet ingredients including dates and honey. In Yemen, fatta is a common meal during the month of Ramadan. 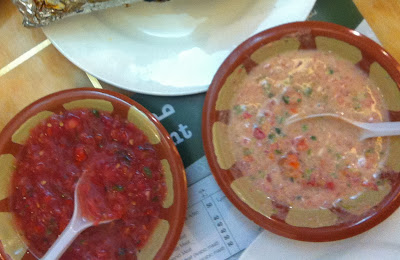 Sahawiq (سحاوق) is similar to Mexican salsa as it is cut up vegetables, with a tomato base usually including peppers, onions, and goat cheese.  Consistency of the sauce runs from diced and chunky all the way to pureed, and even the style served at the same restaurant changes daily, sometimes red, sometime green with more emphasis on peppers, sometimes chunkier, sometimes smoother, sometimes with more cheese and sometimes with less. Sahawiq is generally served with the meal as a sauce to add in the soup, salad, stews in the black pots, with the bread (quite like eating chips and salsa), or really anything you like. 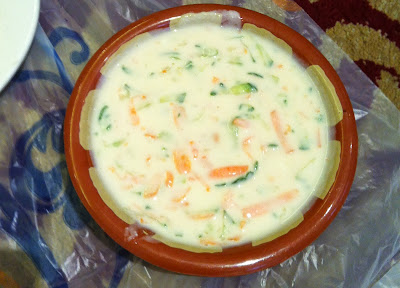 Yogurt salad (سلطة خيار باللبن) is another sauce like sahawiq that can go with the meat or rice.  It is made with yogurt, cucumbers, and sometimes carrots. 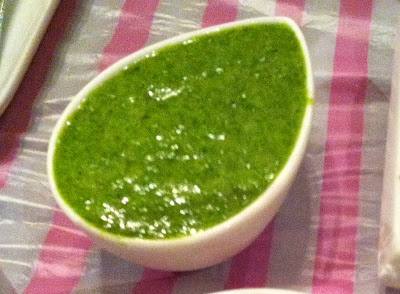 Hulba (حلبة, fenugreek in English) is a main ingredient of Yemeni food, particularly salta, and can also come on the side.  It has a pretty unique taste. 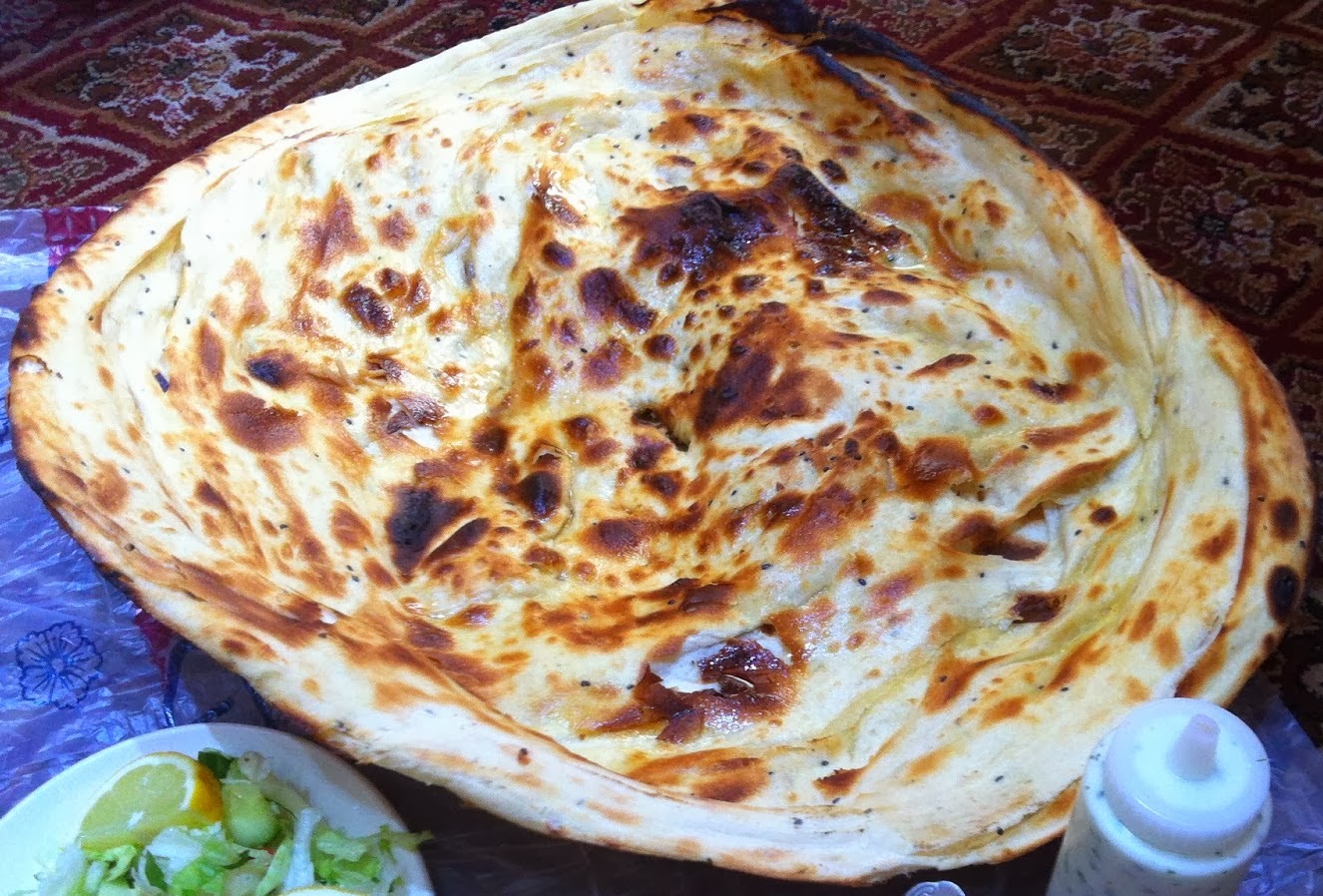 Malawah is one of the many kinds of bread eaten in Yemen. What makes it unique is that it is layered and folded with butter or ghee inside which makes it very tasty. You will most likely find this bread in the many restaurants in Sana'a, Aden, Hodeidah or other parts of the country. It is not usually made at home but perhaps somewhere they do make it at home. It also usually comes very large in a single or "malawah double" serving and then is folded on the table to keep it from cooling down and getting too crispy. 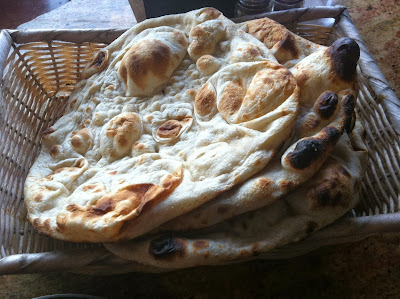 Khobz (خبز) means bread in Arabic and is a flatbread traditionally baked in a tannuur. 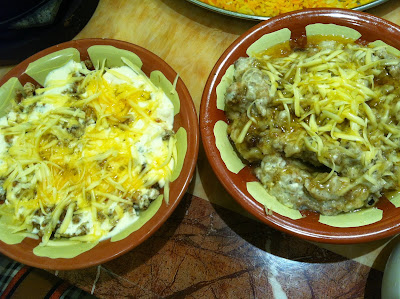 Masoob (معصوب ,ملكية) is a sweet and savory banana-based Yemeni dessert made from a base of over-ripe bananas and ground flatbread with cream, cheese, dates, and honey. It's a very heavy dessert and is best shared with a group!


Sabayah (بنت الصحن) is layers of pastry with butter in between each layer and Yemeni honey and black sesame seeds on top.


Shakshouka (شكشوكة‎‎) is a dish of eggs poached in a sauce of tomatoes, chili peppers, onions, potatoes, often spiced with cumin.  There are many versions that range from looking like normal scrambled eggs with tomato and onion to the poached eggs in the photo above.  My Yemeni friends call it "egg eyes" since in their version that they make at home (like the photo above), the egg yolks aren't broken and look like eyes! 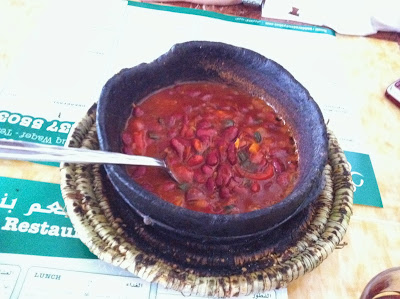 Fasolia (فاصوليا) is a red or white kidney bean dish with tomatoes, onions, and other vegetables and spices. 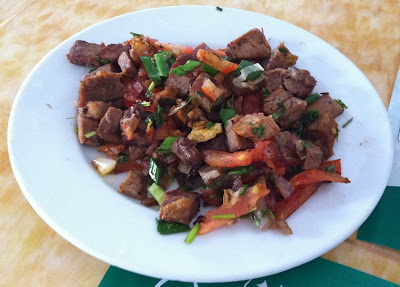 This diced lamb with vegetables is served for breakfast.  For some reason, this tastes like the steak at Chipotle to me... 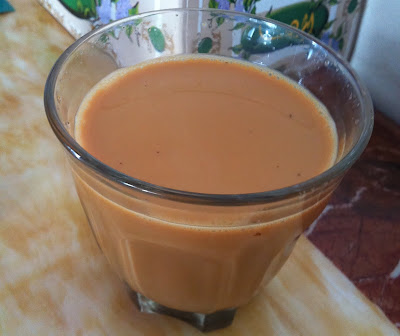 Karak (شاهي عدني) is a type of milk tea made with black tea, evaporated milk, and spices, such as cardamon.  It is often made at home but can be found all over the Gulf.  This is a very classic Yemeni drink and so delicious! 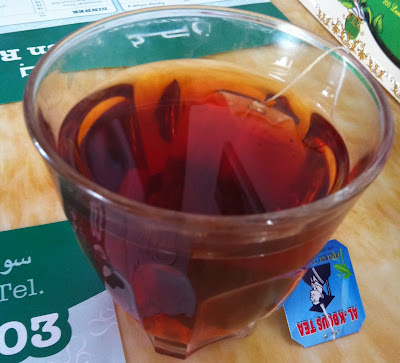 Red tea (شاهي أحمر) is made with ground up cardamon. 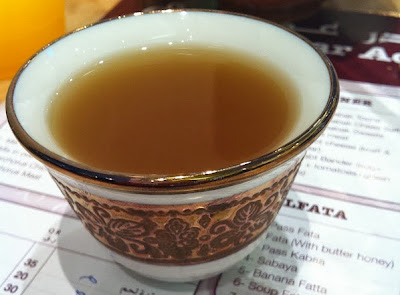 Arabic coffee (قهوة‎) is made from coffee beans roasted very lightly or heavily from 165 °C (329 °F) to 210 °C (410 °F) and cardamom. Traditionally, it is roasted on the premises (at home or for special occasions), ground, brewed, and served in front of guests. It is often served with dates or candied fruit. It is served from a special coffee pot called, dallah (دلة‎), and the coffee cups are small with no handle, called fenjan. The portions are small, covering just the bottom of the cup. Usually the coffee is boiling hot, so larger amounts would take too long to cool to drinkable temperatures. Every time the guest finishes the coffee, the host/waiter will continue to poor more servings until the guest gestures by shaking the cup that he or she has had enough. It is served in homes and in good restaurants by specially clad waiters called gahwaji. It is always offered with the compliments of the house. It is also offered at most social events like weddings and funerals. 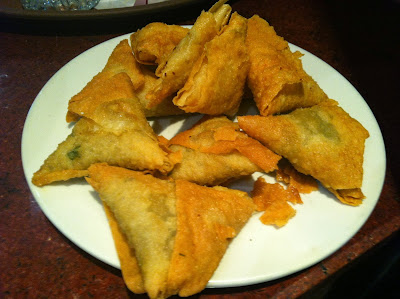 Many Asian countries have their own version of sambusa.  The Yemeni version is eaten during Ramadan for iftar when breaking the fast at sunset.  Usually inside is meat or cheese. 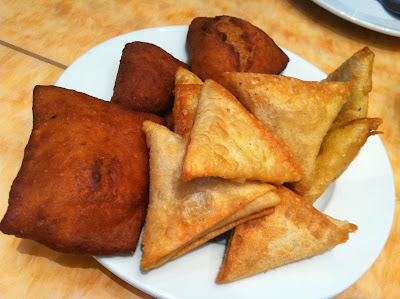 Qamir (الخمير او المقصفص) is a fried dough sweet from Hadramout and it has similar cousins in East Africa, India, and other Arab countries. This bread-like treat can be either sweet or savory. It's usually served during Ramadan along with the sambosa. (Note in the photo that the qamir are behind the sambusa.) 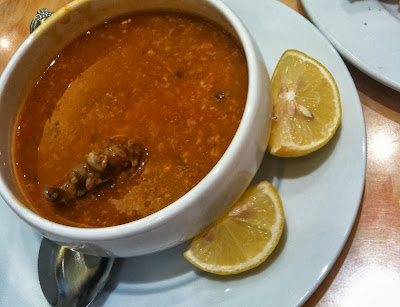 Shurbat qamah is a soup that is only made during Ramadan for breaking the fast.  Buckwheat or oatmeal is a main ingredient and makes the soup chewy.  The broth is made with onion, slices of tomato, and tomato sauce.   There are other variations of the broth with different vegetables or even just milk and salt.  It can be made with lamb or chicken. 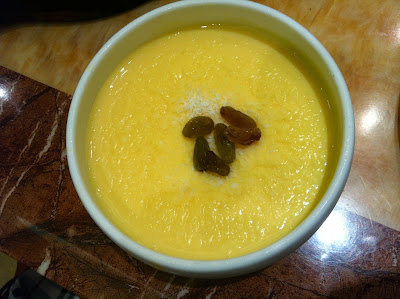 Mahalabiya (محلبية) is a sweet Arab dessert similar to blancmange, made of milk and sugar, and thickened with cornstarch then laced with rose water or orange blossom water. It is often eaten during Ramadan after iftar or for the dawn meal of suhor. The milk custard can be garnished with with ground pistachio and almonds or with cinnamon, raisins and shredded coconut depending on preference.